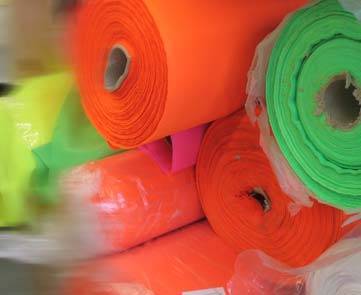 Polyester is a durable and crease-resistant fiber developed in 1941. It is the most commonly used synthetic fiber, and is often mixed with other fibers to reduce wrinkles, soften the touch and get the fabric to dry faster.

The polyester was introduced in the United States with the name Dralon.

This fiber is made from chemicals derived from oil-based products or natural gas and requires the use of non-renewable resources and large amounts of water for the cooling process. However, polyester can be considered a chemical fabric that respects the environment; If it´s not mixed,it can be melted and recycled.

It can also be made from recycled plastic bottles.

Origin of the Polyester

The first polyester fiber was produced in England In the 1930s,a continuous filament, obtained from dicarboxylic acids called Terylene; In France this fiber was called Tergal and in Spain Terlenka.

After the Second World War, the german company Hoechst, began to produce a polyester with the name of Trevira.

In 1946 Du Pont acquired the exclusive to manufacture polyester in the United States, being known in that country with the name of Dacron, and released in 1951.

During these years Du Pont aimed to multiply the technical properties of polyester by texturizing filaments and creating synthetic leather (fiberfill for fillings).By overlapping them,they were used for sleeping bags and anoraks, since they produce better results than the natural feather.

Velas Alicante is synonymous with quality and guarantee