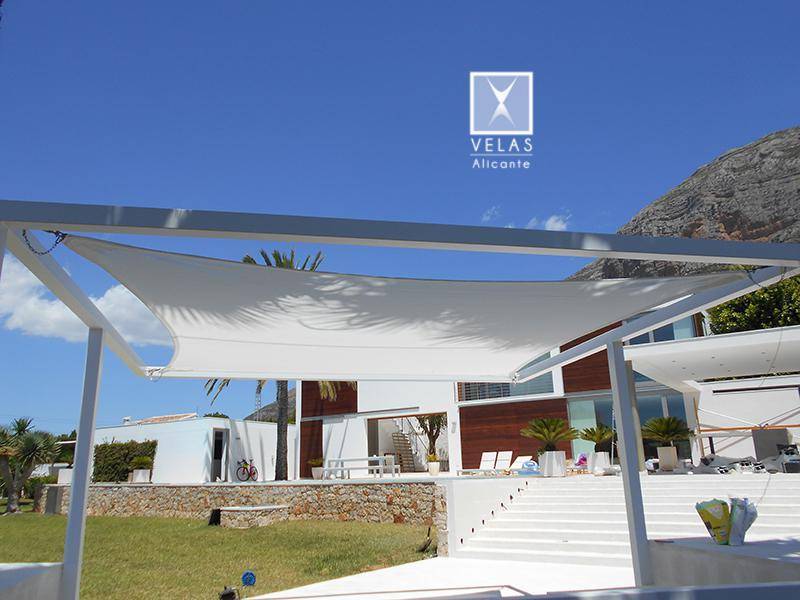 Shade tensioned sail work consisting of a four-pronged sail supported and tensioned on a previous structure.

This type of structure can withstand the tension of a shade sail and allow the extension of the same without the need for other anchor posts in the front, which greatly facilitates accessibility. The fabric used is high density polyester and the stresses as well as the perimeter wire are made of stainless steel.The sun protection achieved is 97% and its warranty by the manufacturer is 10 years maintaining that sun protection.

Velas Alicante provides a detailed study of the shadow needs of each client offering the best item and system to create a unique and quality space.

Jávea (in Valencian and co-officially, Xàbia) is a municipality of the Valencian Community, Spain. Located on the north coast of the province of Alicante, in the region of Marina Alta. It has a population of 27,681 inhabitants (INE 2015), of which 53.1% is of foreign nationality. The Montgo is the most remarkable and visual summit of the region, with its more than 750 m in height, it serves many times Of parapet of the storms that come from the North collaborating in great measure of the maintenance of the local microclimate. They are the cape of San Antonio (to the north) and the Cap Prim or Cabo de San Martín between which the bay of Jávea is formed. It limits with the localities of Denia, Benitachell, Teulada and Gata de Gorgos, as well as with the districts of La Jara and Jesus Pobre, both belonging to Denia.